The peculiar characteristic of Briatico is the sensational quadrangular tower called “La Rocchetta”. The tower, now ruined, stands on the seashore, in one of the most beautiful areas of the Tyrrhenian coast. The tower was built in the 13th century and it was part of the coastal defense system that was a bulwark against Saracenic raids. Approximately 100 meters from the coast, next to the ancient Roman fishpond, you can find the tower of St Irene, built by the Spanish government in the sixteenth century. Briatico was rebuilt on the banks of the Murria torrent after a catastrophic earthquake in 1783.

The origins of Briatico could date back to the Magno-Greek period; recent excavations in the archaeological area of Punta Safò have brought to light finds from prehistoric times and later Roman settlements. It is certainly known that it was a fief of the Ruffo from 1269, of the Marzano, princes of Rossano, then of the De Castro-Bisbal family and finally belonged to the Pignatelli of Monteleone until the abolition of feudalism in 1806.
In the internal area, going up the road towards S.Cono, on a nearby hill in the area of the old Briatico, are still visible the remains of the ancient Castle. As for this castle, following the numerous earthquakes that struck this area, there are now only a few walls entirely covered by vegetation that allow you to distinguish the profiles of the wall and towers. 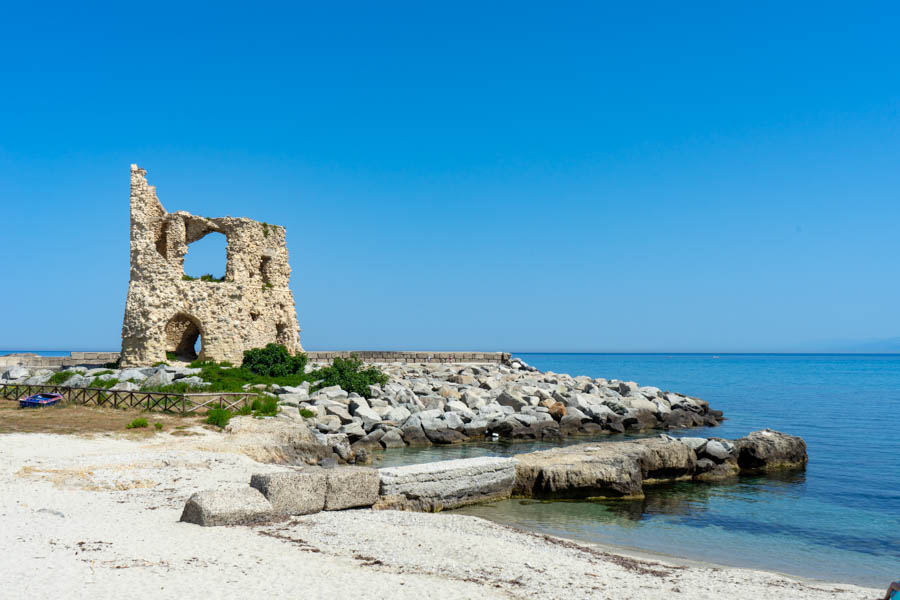 Prehistoric remains have been found such as terracottas, as well as other flint and obsidian tools, a vase with human remains inside and a rich set including an hyaline quartz crystal pendant, grains of amber and one of carnelian with engravings. It would be a human settlement dating back to the Copper Age.
Then were also found also Roman necropolis and remains of a building complex (perhaps thermal baths) of imperial age.
Along the valley of the Murria there are medieval eremitic caves, some of which are called the ‘Caves of the fairies’. However, after the earthquake of 1783 there are few remains of the Convent of the Dominican Fathers founded in 1498 and the church of Santa Maria del Franco of the Norman age (11th century).
In particular, what remains of the church of Santa Maria del Franco is only the statue of the Co-Patron of Briatico (the Immaculate Madonna) which is a wonderful Spanish statue of seventeenth-century.
And what remains of the cathedral of San Nicola, which is also now a ruin, is instead the beautiful canvas of San Nicola painted in 1600 by Tommaso di Florio, painter of Vibo Valentia, and a crucifix of the fifteenth century. All these works are now kept in the Chiese Matrice, a church dedicated to the patron san Nicola.
The earthquake of 1783 in Briatico left only the ruins of the medieval castle built by Ferdinando Bisbal and in the ancient town, which at that time had 12 churches, left intact only 3 convents.
Only two of the five Towers of the anti-Turkish defensive system remained intact on the beach:

–la Rocchetta, a high pentagonal coastal watchtower, originally built by the Greeks, rebuilt by the Romans, was restored in medieval times;
–Torre Sant’Irene, designated by the Spanish Royal Government as a lookout against Barbary raids.

Briatico was the birthplace of:
• Chola da Briatico, the only cartographer of Southern Italy before 1500
• Angherà brothers (Domenico and Francesco), who fought in the Calabrian insurrectional revolts of 1848
• Raffaele Lombardi Satriani, one of the most important ethnographers and lovers of the popular traditions of Calabria, who left us a large amount of works on the subject
• Nicolò Antonio Gravazio, jurist in Naples who wrote works of a forensic nature
• Domenico La Torre and Alfonso Prostamo: scholars of the history of Briatico

Calabria: a land to discover

An unforgettable land made of sun, sea, excellent food, hospitality and warmth. Come and discover our land.

Any cookies that may not be particularly necessary for the website to function and is used specifically to collect user personal data via analytics, ads, other embedded contents are termed as non-necessary cookies. It is mandatory to procure user consent prior to running these cookies on your website.